The overall rating is based on review by our experts

Today we are going to look at the new Apple Mac book air that came out in late 2020 with the new M1 chip. Outside has not much changed and the real improvements can be seen inside this model. Apple went away from Intel and started creating its chips for its Mac’s and it has an integrated CPU GPU and neural engine all in its chip

So in the base model of the mac book air 2020 has an 8 core CPU consist of 4 performance CPUs and 4 efficiency cores along with a 7 core GPU. You can bump up the GPU up to 8 GPU. apple went out to make its chip for its MacBook which promises huge performance increases across the board. And it is not just performance it is also the efficiency that will improve that means better battery life and better thermal performance so much that apple took out the fan from its device, making it a fanless laptop.

Talking about design as I said apple has not changed a lot, it’s pretty similar to the previous Mac books. Still sleek, classic, and stylish. Still, no touchscreen, If you were hoping that Apple will give you a touch screen on this one you will be disappointed. For ports, you have the two thunderbolts 3 on one side and just the headphone jack on the other side.

The camera is just 720p, which a lot of people complain about. You got touch id in the power button for fast login with your fingers.

The display is 13.3 inches along with LED backlighting, IPS display technology and a resolution of 2560 x 1600 for 227 pixels per inch. It has 400 nits of brightness so it can be used outside. It has true tone technology and also has the P3 wide color gamut. For a computer this small it has one of the best speakers you can find in the market.

It’s also fan-less, so yeah no more irritating fan noises while working. The performance of this model is unbelievable, even though after opening all the apps, opening lots of tabs, and running Photoshop and video editor at the same time this device doesn’t heat up, you can feel the warming but not like other laptops where you feel the heat on keyboard.

Customers have complimented about the efficiency of this device and how does not matter hard they try they could not get this thing to slow down. You have the awesome magic keyboard, along with the rubber dome and scissor-switch on every key, from the previous model. it got great feedback and great travel which makes it a lot better than a surface laptop keyboard. Downward you have your ultra-responsive touchpad which is extremely smooth. The user will enjoy the panning and pressing process.

the base model of the Apple Mac Book air late 2020 is available at a price of 999$ USD, for most of people this is an appealing device considering the quality and performance they are getting.

is it worth buying? In my opinion yes! This is an absolute killer laptop for your daily use. the whole experience of this Mac book is on another level 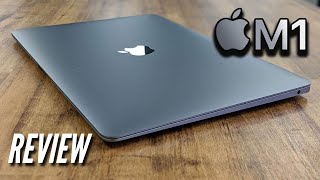 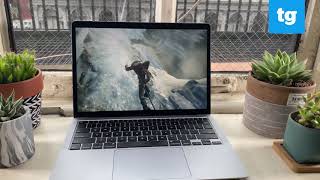